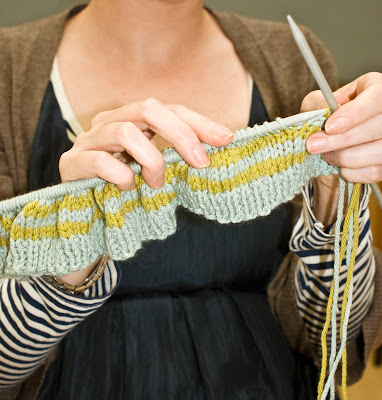 I had the pleasure of introducing some enthusiastic students h ow to knit and crochet this week at West Dean College in Sussex. It was gloriously sunny autumnal weather and the weekend was lots of fun; filled with great food, great weather, crafting, relaxing and laughter. Just as it should be at West Dean!
This is some of the knitters' great first attempts. They all did fantastically well and there are already plans for more one day tasters of knitting and crochet for improvers! 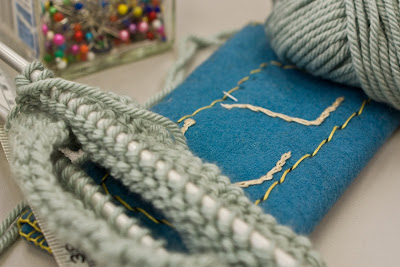 Posted by claire montgomerie at 21:31 2 comments: 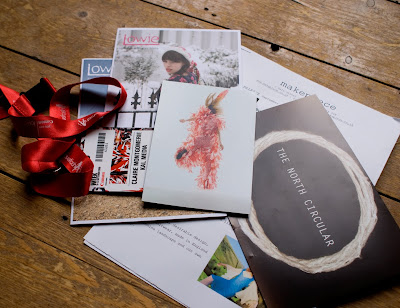 It was London Fashion Week this weekend and I was lucky enough to secure a press pass to the exhibition at Somerset House. I went along yesterday in the glorious sunshine to interview some lovely ladies who have big plans for the British textiles industry, so as you can imagine, I was very excited to meet them. More of that very soon I hope.
To celebrate some of the talented people I saw and talked with this week, here are some of my personal highlights from the exhibition and catwalk shows.

Although September fashion week showcases the Spring/Summer catwalks, there was still some beautiful knitwear in evidence. At Pringle, Clare Waight Keller has transformed the brand from the tired and uninspiring heritage brand I witnessed during my time on work placement at their design studio in 2003. In this season's show I was pleased to see the knitwear holding centre stage, looking both modern and interesting. Waight Keller used such traditional stitches as chunky cables and even hairpin lace (which I was so excited to see used in a contemporary ensemble after my recent class at City Lit) combined with the more obviously summer attire of fine gauge silky sweaters, tiny fine gauge cables and pointelle dresses to great effect. Thus she proved that knitting can be suitable and, in fact, eleg

ant at any time of year.
Another classic brand which appeals to my personal tastes is Jaeger London; a British brand, plus being popular in the 70s equals retro classic perfection! There were some great knits incorporating the metallic trend I also noted at such brands as Louise Goldin and Betty Jackson, yet another British fashion institution, alongside some chic pieces which utilised the desirable contrast of chunky and fine knit stripes as seen on the right. 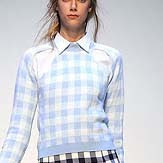 Another trend here, and all over the collections was for the longline cardigans we have seen for quite a few seasons; good news for my last Summer collection cardi, which will last and last!
It was not just the oldies doing knitwear well this season, some relatively new and talented designers also caught my eye. Christopher Kane was one of the hot tickets of the week and I adored his subtle, soft pastel checked jumpers and vests, which layered beautifully over the unusually large proportioned gingham skirts and dresses he sent down the catwalk.
Finally, I cannot mention the knitwear at LFW without talking about Mark Fast's controversial show. He sent out some incr

edibly tight fitting and transparent fine gauge knits which mainly looked more like underwear than outerwear; Fast innovatively sees knitting as an extension of hosiery rather than as traditional sweaters. He also used 'plus-size' models (for which phrase substitute 'normal' or 'average' as you wish), causing a great hurrah in the press. To be honest, I was not overly enamoured by his dresses, or the make up which made all his models, whatever their size, look half dead, but the structures and techniques used in his work are fascinating. I especially liked the beaded embellishments, which looked like large glass beads trapped in tubes of fine knitting. They remind me of a bracelet I started one year as a birthday present for a friend, but never finished (sorry Katherine!) This show might just be the motivation I need to make another.
I certainly got a lot of inspiration from all the coverage this week and am already planning my next summer collection, despite not being halfway through winter's yet...too many ideas, not enough hours in the day...
Posted by claire montgomerie at 20:28 2 comments: 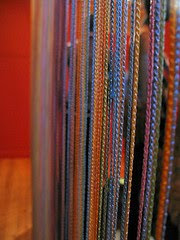 This week I finally made it to the Missoni exhibition at the Estorick Collection. I have been meaning to go for ages but only just made it in time before it finished and I am really glad I did. I have never been to the Estorick before, and it is a small and quirky space, with some beautiful Italian art.

The Missoni exhibition itself, with its yarn curtains and riot of colour was very inspirational. However, for me, it was also a bit hit and miss. While most rooms caused my heart to race faster with excitement and others stunned me into silence as I tried to work out the knit structures and wish I ha 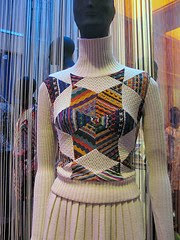 d thought of them, some featured more of the Futurism pieces which inspire the Missoni family than their actual design. Although I enjoyed these artworks, I have only just been to visit the Futurism exhibition at the Tate, so I would rather have seen only design relevant pieces and more knitting, especially as their technique is superb and their innovation stunning.
My highlights included the designers' colourf 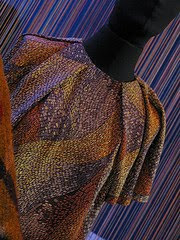 ul mood boards and stripe graphs and the short films. One of these showcased knitting and design processes, machinery and the people who work them. With no narrative, this was spell binding and led me to long to use the reassuringly familiar heavy, gliding, clunking and swishing industrial knitting machines again. There is something so theraputic and beautiful 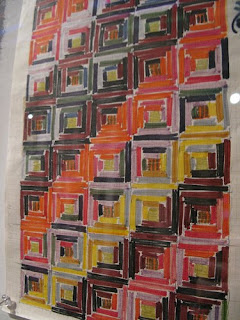 about the juxtaposition of working with huge, heavy metal machinery and soft, fluffy fibres, which was demonstrated fantastically. The cute and cuddly family history film was also fun, and the Missonis themselves came across as likeable, intelligant and multi-talented as well as a very close, loving family. All very warm and fuzzy I must say and it resluted in my leaving the exhibition (after an obligatory strong Italian coffee of course) feeling happy and inspired.
P.s. I must add a thank you here as I do not know how but, dear reader, I managed to leave my camera at home again, so all pictures are courtesy of my favourite co-exhibitioner, and fellow Claire, Gingerknits.
Posted by claire montgomerie at 17:24 3 comments:

pick of the crop 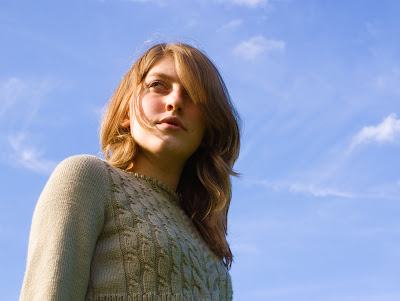 As summer slides slowly out of view, I am almost ready to publish the final pattern from the booklet of five designs from my summer collection. It is just going through final pattern checks and charting and hopefully will be up on Ravelry in the next week or so. The sweater takes inspiration from the cropped shapes which were around in the spring/summer collections, but will also wear well into the winter with the layering theme from the current collections. It is also very simple to lengthen if the cropped style is not for you. 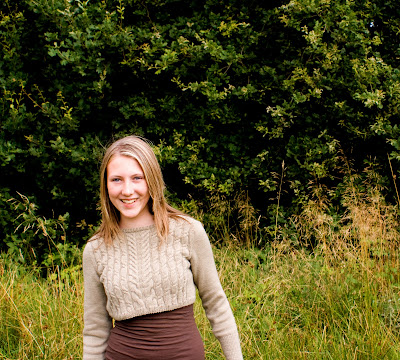 With the trees turning colour and having already swept up the first batch of leaves from he garden, I am working on the collection for winter, with woolly warmers being the main focus of the English Heritage theme. Look out for the first projects from that sometime in October. 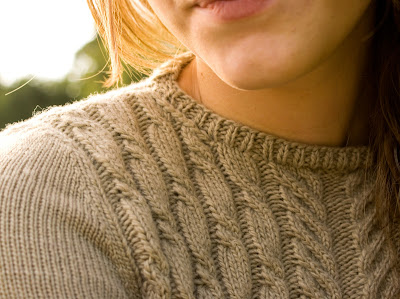 Posted by claire montgomerie at 14:28 2 comments: 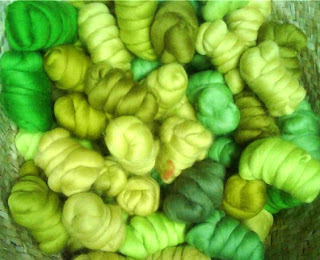 I was very excited to go to the long anticipated opening of the relocated Handweavers Studio last night. So excited in fact that I forgot my camera, but I did manage to snap a few blurry pics on my mobile, so hopefully you will get the idea of the rainbow of colours available in the store.
I was extremely jealous of the acres of shelving and storage space in store, some of which I wish we had at home and at loop... 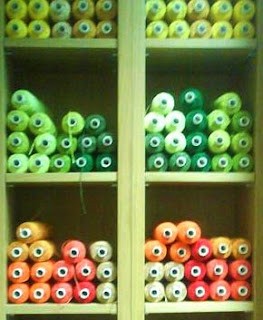 ...just look at how much wool tops they can store, and such bright jewel-like colours! 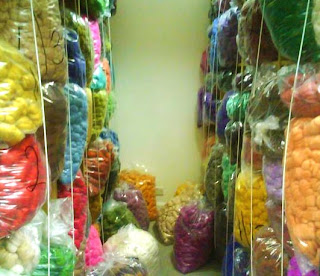 My only criticsm of the store is that the decor is a little sterile, but to be honest, the shelves are so full of yarns in so many different, tantilising hues that you don't really notice.
I succumbed to some beautiful silks in peacock colours, goodness knows what I shall do with them, but I could not come out without making a purchase of something bright and jolly so I could take some of the rainbow home with me.
The studio also has an extensive range of classic books about weaving, rug making, knitting, crochet and all sorts of crafts, some of which I am sure have sat on the shelf in the former store for years and years. I bought a book about crochet which was printed in 1983 but looked like new! More about that in a later post I think.
Handweavers is still running an extensive workshop schedule, so if you fancy learning to weave in any form, get yourself down. I am considering doing a refresher in tapestry weaving, which I always loved on my degree, and the good news is, it is just down the road; oh, so much more handy than when it was in Walthamstow! 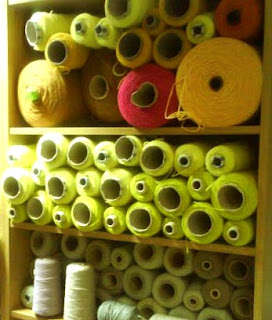 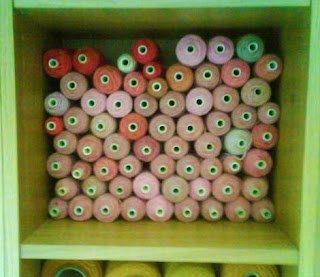 Posted by claire montgomerie at 09:28 2 comments: 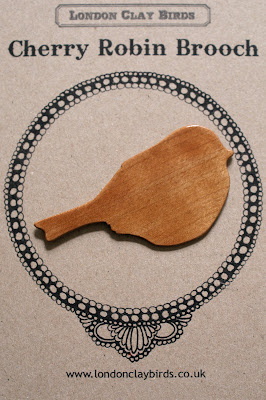 ...or should that be cherry red? I couldn't resist this little wooden beauty at the We Make London fair this weekend. It is made by D.H.Painter in London, so it definitely fits my local, original design brief for new whimsical purchases, aside from the fact that it is adorable of course. I think it will be perfect on a creamy, butter soft knit.
Check out what I was doing at the fair here
Posted by claire montgomerie at 16:32 2 comments: 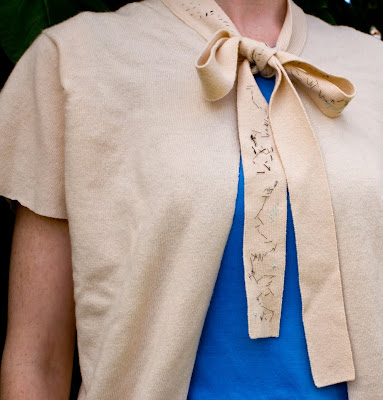 Way back when I first graduated from my MA in textiles and was looking for employment, I whiled away my days cutting up and embroidering old jumpers or making them into toys. This week I have found myself pining for that theraputic activity and with a good three boxes of old woollen jumpers which I just cannot resist accumulating, I thought it was about time I did something with them. Here are some of the fruits of my labour; 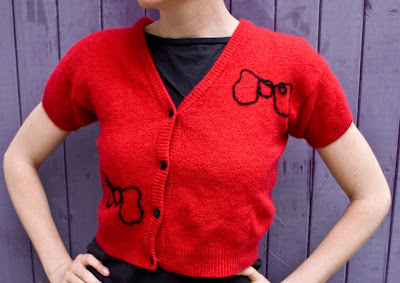 I have gotten a little bit obsessed with bows in these, but hey, who doesn't love a bow?! The pink jumper is cashmere, bought in a little shop in San Francisco, from which I could've filled whole suitcases with buttery soft second hand cashmere goodies. 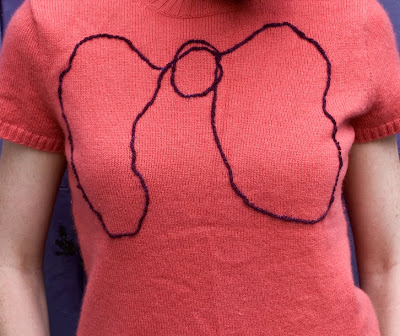 Well, the current climate is calling for sustainability and recycling, and these jumpers fit the brief, which is just as well, as now I have way too many bow-laden woollies to wear myself!
I shall pop them on my website when it has undergone its revamp later this month, and in the meantime will be hauling a pile of them to the We Make London fair this weekend.
Posted by claire montgomerie at 10:20 6 comments: 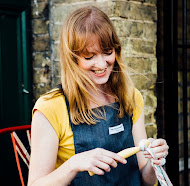 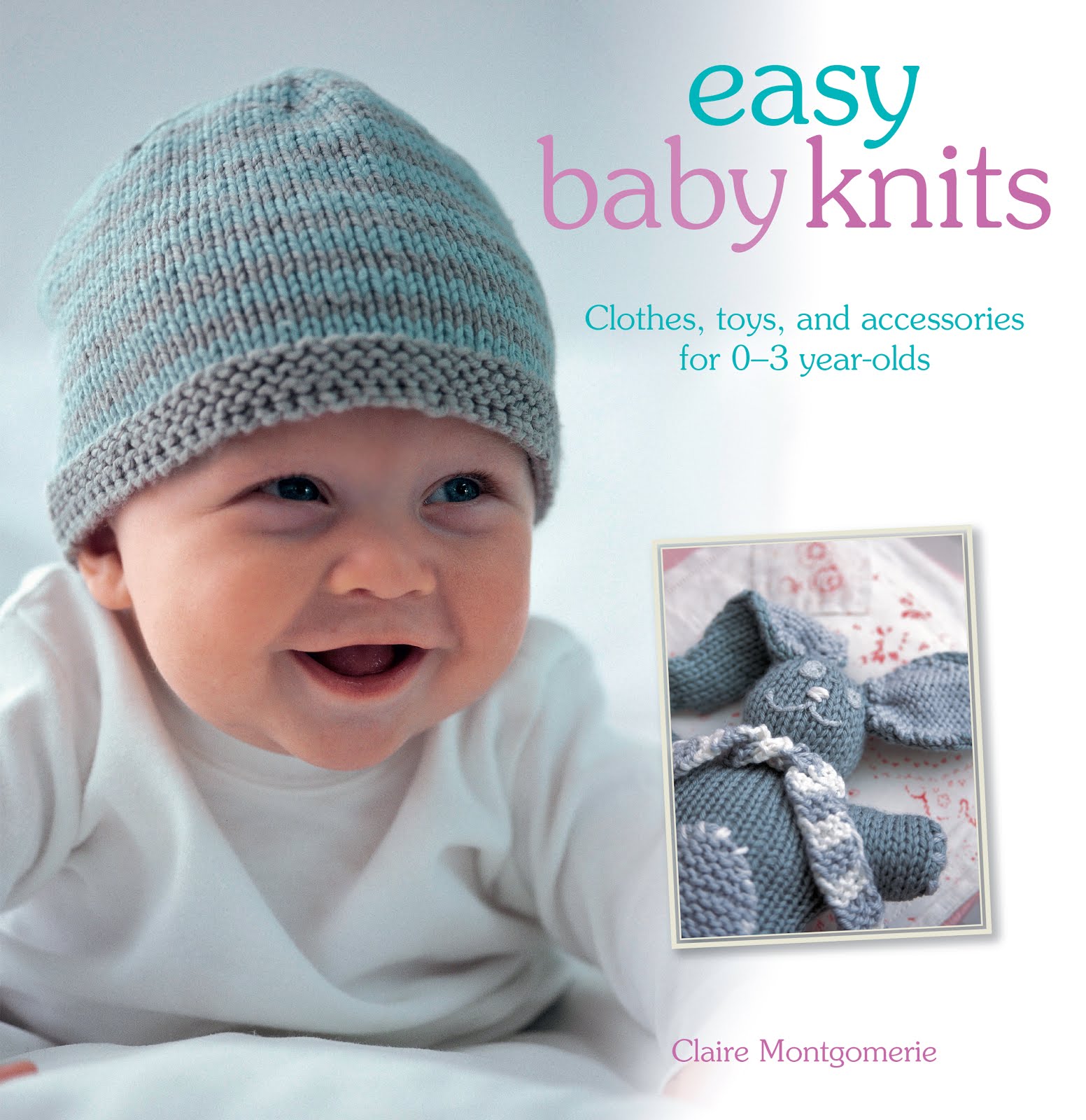 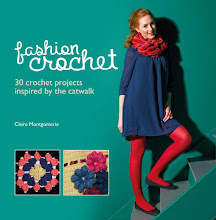 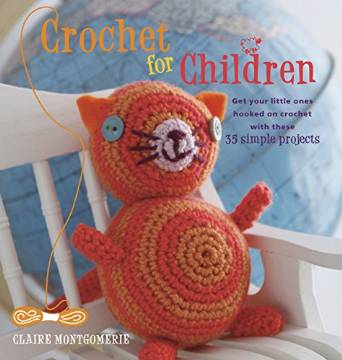 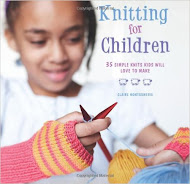 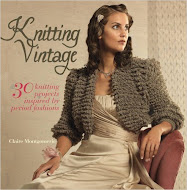 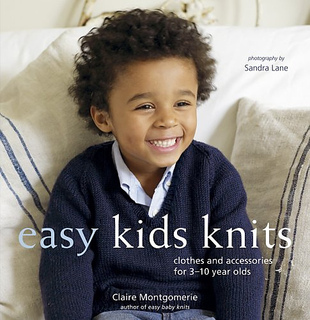 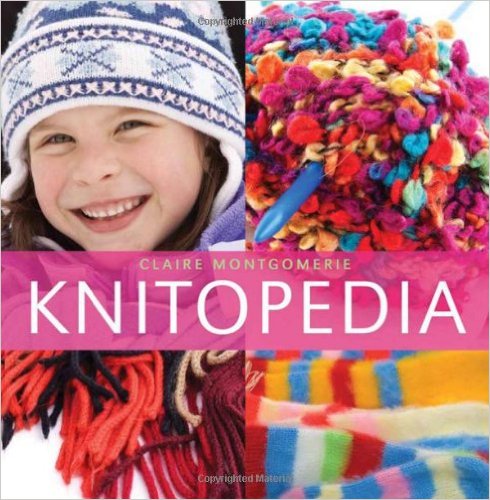 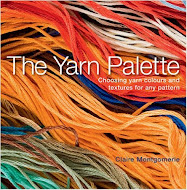